Off the coast of the US state of Alaska, the earth shook last night with a magnitude of 7.5, the epicenter being located 84 km southeast of Sand Point. This is a place on the Aleutian island of Unalaska. The hypocenter was at a depth of 40 km. Despite the relatively large depth of the earthquake epicenter there was a tsunami alarm. The same applies to larger damages. The region is only sparsely populated. In relative proximity to the location of the earthquake are some volcanoes that are classified as potentially active: Mount Makushin, Mount Okmok and the volcanic island of Bogoslof, to name only 3. The volcanism of the region is directly related to the Aleutian subduction zone where the earthquake occurred.

As is typical for earthquakes of this magnitude, there were numerous aftershocks. The strongest one had the magnitude 5.9 and further aftershocks must be expected. 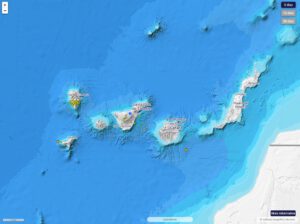 The Canary Island La Palma was again hit by a swarm quake yesterday morning. The seismographs recorded 25 tremors with magnitudes between 1.6 and 2.0. The hypocenters were at depths between 20 and 45 km. In this area of the asthenosphere, it is usually ascending magma that triggers light tremors. The epicenters were located in the south of the island, which was formed by eruptions.

In addition, seismicity is also increased in other regions of the Canary Islands. For example, it shook unusually often in the area of Tenerife and El Hierro is also still affected by sporadic quakes. Although there are no indications of an imminent volcanic eruption, in the longer term an eruption could occur again. In my opinion the most promising candidate is La Palma. 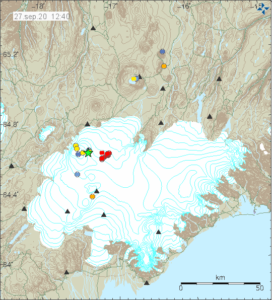 Under the Icelandic glacier volcano Bardarbunga one of the strongest earthquakes of the last months occurred. It had a magnitude of 4.9 and its epicenter was 8.3 km east of the caldera. The epicenter of the earthquake was located at a depth of 4.8 km. A total of 12 earthquakes were recorded in the area of Vatanjökull within 48 hours.

An unusual report from Turkey combines earthquake with volcanic activity. On Sunday, it shook in the border area of the provinces Aksaray and Niğde with a magnitude of 5.3. The epicenter was located 23 km northeast of Emirgazi. The epicenter of the earthquake was only 3 km deep. Almost 30 km northwest of the epicenter is the volcano Hasan Dağı. With a height of 3.268 m it represents the 2nd highest elevation of Central Anatolia. Videos make the round by the social media, which developed after the earthquake and show gas leaks. Apparently they are new fumaroles that have formed near the summit crater. A team of geologists will now take gas samples and analyze them. Gas eruptions occur repeatedly after earthquakes and need not be related to volcanism. On a volcano, however, one can assume that they are probably magmatic gases. 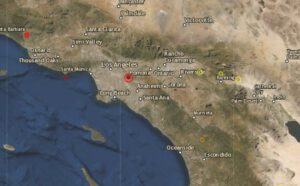 Yesterday morning, an earth tremor with a magnitude of 4.5 shook the greater Los Angeles area. The epicenter was 8 km east of Los Angeles. The depth of the epicenter was indicated by USGS as 18 km. According to the EMSC, the hypocenter was located at a depth of 20 km. In spite of the comparatively large depth of the focus, the earthquake was clearly perceived in the Los Angeles area. There are reports of small damages like cracks in house walls. Larger damages did not occur.

The earthquake manifested itself in the same fault zone as the 1987 Whittier Narrows earthquake, which had a magnitude of 5.9 and caused destruction in the city. The activated fault zone is the Puente Hills thrust fault, which is associated with the San Andreas Rift. 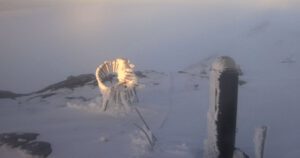 Tonight there was an earth tremor of magnitude 3.3 near Grimsvötn volcano. The epicenter was 11.1 km east of Hamarinn. The center of the earthquake was with 3.8 km relatively flat. Hamarinn is a subglacial volcano located in the west of the Icelandic glacier Vatnajökull and belongs to a system of crevasses that connects Grimsvötn and Bardarbunga. There have been 3 other weak earthquakes along the volcanic system.

Since a few weeks an increase of seismic activity at Grimsvötn can be observed. Volcanic experts assume that the volcano is preparing for an eruption. Whether and when a volcanic eruption will occur cannot be predicted yet.

Another strong earthquake occurred in the Chilean region of Atacama. It had the magnitude 6.3 and was located 88 km north-north-east of Tocopilla. The depth of the earthquake is 45 km according to the EMSC. The earthquake occurred at 07:36 UCT. In Chile it was 04:36 UCT and the people were rudely torn from their sleep.

In the same area there had been an earthquake of magnitude 6.8 on September 1. One can assume that the two earthquakes are related. There were further aftershocks.

Several potentially active volcanoes are located in the Atacama. The Lascar is one of them. It showed signs of awakening at the beginning of the year and emitted heat radiation. The geyser field near the Tatio volcano is worth seeing.

Under the US-American Yellowstone Caldera a seismic swarm is manifesting itself today. The strongest quake to date was M 2.9. EMSC indicates a total of 12 quakes with magnitudes greater than 2. The hypocenters are located at shallow depths of less than 5 km. The epicenters are concentrated in a small area southwest of Yellowstone Lake. They are located in the area of Heart-Lake and Mount Sheridan. The depression of the lake was formed by folding processes at a young fault zone. Therefore the swarm quake could be of tectonic origin. However, there is also a thermal field at the lake, so hydrothermal influences could come into play. The Heart Lake Geyser Basin is also known for its thermophilic archaebacteria, which occur here in a basic environment.

An earthquake of magnitude 6.6 occurred in the central region of the Mid-Atlantic Ridge, the epicenter of which was located between South America and Africa, more precisely 1218 km north of Acaraú in Brazil. The hypocenter was located at 10 km depth. Only last week there had been a strong earthquake in this region.

Two strong earthquakes shook the southwest coast of the Indonesian island of Sumatra. The quakes had magnitudes of 6.9 and 6.8 with hypocenters at depths of 39 and 10 km. The epicentres were 105 km and 132 km west of Bengkulu. More than 300,000 people live in the city. The quakes occurred in the early morning hours: the first quake manifested at 05.23 and the second one at 05.29. There are no reports of major damage and no tsunami alarm was given.

In relative proximity to the epicentres are numerous volcanoes, of which Kerinici and Anak Krakatau are currently the most active. Sinabung is located in northern Sumatra and a good 800 km away. However, the north of Sumatra was not spared by earthquakes either. Several earthquakes occurred in the area of 3. But these earthquakes might have been too weak to affect the Sinabung.