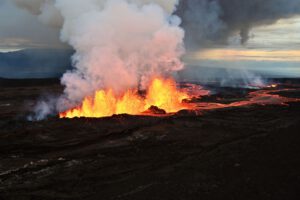 The eruption on Big Island Hawaii continues and lava flows from the northeast rift of Mauna Loa volcano. During the day yesterday, the height of the lava fountains from fissure 3 reduced to a maximum of 25 meters. On the LiveCam it can be seen that the lava fountains are still active today. A wall of cinders is slowly forming around the active part of fissure 3. The fountains feed a lava flow with several arms. The most advanced one was moving towards the saddle road yesterday at noon at a speed of 24 meters per hour and was still 5800 meters away from it. The slope is slowly decreasing in this area, so the lava flow will continue to slow down. At the same time, the lava front is getting wider. The USGS wrote in its last update that the lava flow will take about 2 more days to reach the saddle road. I suspect it will take even longer, but if the road is disrupted by the lava, one of the main arteries between the island’s east and the west of Big Island will be interrupted. Motorists will then have to take a considerable detour.

Yesterday there was an earthquake of moment magnitude 5.4 (Ml 5.6) under the Taupo caldera in New Zealand. GeoNet published more information about it today. The earthquake manifested at 10:47:59 UCT. In New Zealand, it was 11:47 p.m., which is night-sleeping time. So also the residents of the caldera were startled out of their sleep when they were shaken hard. But it didn’t stop at one shaker, as there was minor damage as items fell off shelves and some roof pieces came crashing down from a store. There were more than 180 aftershocks, 30 of which could be felt. The strongest aftershock brought it to M 4.5.

The main earthquake was the strongest since an M 5.0 earthquake in 2019, and an increase in seismicity has been observed under Lake Taupo since May 2022. Volcanologists believe the series of earthquakes is caused by activity related to magma and hydrothermal fluids inside the volcano. This activity could continue with varying speed and intensity in the coming weeks or months. 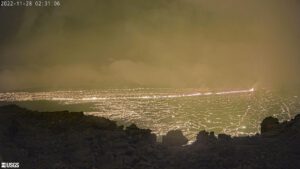 An eruption began at Mauna Loa in Hawaii. Around 11:30 p.m. HST (10:30 a.m. UCT), an eruption fissure opened in the Moku’āweoweo summit caldera. Lava is erupting from it, flooding the floor of the caldera. The activity is so far limited to the summit caldera and does not pose a threat to residents. Nevertheless, the alert status has been raised to “red.” Volcanologists emphasize that winds may blow volcanic gases and possibly fine ash and Pele’s hair. Health authorities are in close contact with the HVO and close monitoring is being done to see if any health hazard develops for humans and animals. As early as October, residents were warned to prepare for evacuations if a volcanic eruption occurred at Mauna Loa. If cracks form on the volcano’s flanks, then there is danger to residents living near the volcano. Lava at Mauna Loa is usually thin and flows quickly. 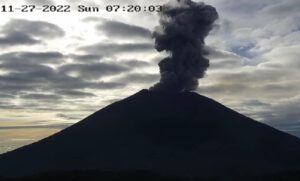 As reported by the government agency MDMA, the volcano San Miguel in El Salcador increased its activity over the weekend and doubled its previous ejection heights of tephra. During particularly strong eruptions, the volcanic ash rose to 1100 m above crater level. The eruptions had a VEI of 1. Nevertheless, the eruptions were described as phreatic. Volcanologists report that they are closely monitoring the volcano’s activity and watching for indications of whether there is a transition to stronger phreatomagmatic eruptions. 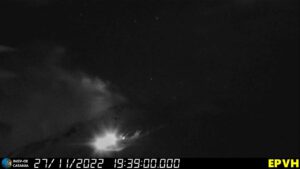 Yesterday evening, Etna opened a vent at the base of the Southeast Crater cone. On the LiveCam you can see a bright spot coming from a short lava flow. According to INGV, the vent opened at 17:00 in the northeast, at an altitude of 2800m. We have observed similar events several times in the last years. Often there was a paroxysm after a few days of lava flow activity. Tremor and seismicity are so far inconspicuous, the lava seems to escape without much pressure. It is quite possible that this is the material that intruded under the crater 2 weeks ago. 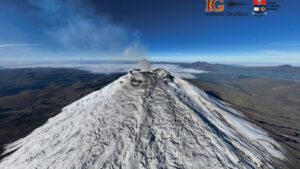 On Thursday morning, many astonished eyes turned in the direction of the Cotopaxi summit, because at night there must have been an ash eruption that turned the snow at the volcano’s summit gray. The volcanologists from IG go wrote in their report that it was only a small ash cloud that had risen up to 300 m above crater level. It is believed that the ash was produced in an exhalation that also emitted a lot of gas. A clue to the exhalation was provided by a weak tremor signal recorded by seismographs around 6:30 p.m. local time. Although it was only a small eruption, the activity worries the people of the region. Cotopaxi is the second highest volcano in Ecuador and one of the highest active fire mountains on Earth. The Andean volcano rises 5897 meters above sea level and its summit area is covered by a glacier. Therein also lies the greatest danger of Cotopaxi, because large eruptions could melt the ice, creating lahars. They could reach the suburbs of Quito, because the capital of Ecuador is only 50 km away from the volcano. 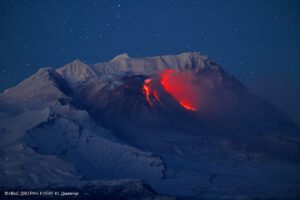 On Kamchatka, the Shiveluch is erupting volcanic ash. According to VAAC, it rises to an altitude of 4000 m and drifts towards the east. KVERT attests that the volcano has increased activity and indicates that the dome continues to grow. MIROVA detects moderate thermal radiation. Red glow is visible at night and incandescent debris avalanches are coming off. Activity may continue to increase, producing pyroclastic flows. The photo was taken on 19 November by Yu. Demyanchuk (KVERT).

Eruption of Cumbre Vieja on La Palma in September 2022

On September 19, 2021, the eruption began on La Palma. In the northwest of Cumbre Vieja opened 2 fissures, each about 200 m long. Lava fountains fed lava flows that reached the settlement of La Paraiso within a few hours. By the following day, more than 100 buildings were destroyed.
The eruption announced itself by a seismic crisis of 8 days duration.
The eruption lasted until mid-December. Within 90 days, lava flows destroyed 2988 buildings and buried 92 km of traffic routes. A lava field with an area of 12.4 square kilometers was created. 494 million cubic meters of lava were produced. This corresponds to 0.494 cubic kilometers, which is already a considerable volume. In historical times, it was the longest eruption of Cumbre Vieja. 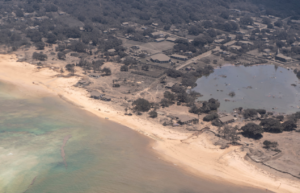 The eruption in Tonga does not want to end. VAAC Darwin registered another eruption cloud over Tonga at 12:00 Zulu time. The altitude indication gives a range between 12,000 and 19,000 m.

It is now clear that the damage to the islands of the Kingdom of Tonga is greater than first thought. The tsunamis reached heights of up to 120 cm and caused destruction on the coasts. Most of the islands are covered in volcanic ash and cut off from communication. Saturday’s eruption was also much stronger than initial reports indicated. Volcanic ash was detected at 39 km altitude. The blast wave from the explosion passed around the Earth 4 times.

What made the eruption so strong?

Before the big eruption on Saturday, there were two moderate eruptions and several small ones. The series began on December 20. These eruptions were Surtseyan eruptions in which water already had a hand. Then, in the large eruption, a large amount of seawater probably entered the volcano’s conveyor system and explosively vaporized. Another possibility is that an injection of fresh melt into the magma body occurred, resulting in a reaction between two different magmas. The blast wave from the explosion circled the globe 4 times, causing gravitational shock waves that reached almost into space. 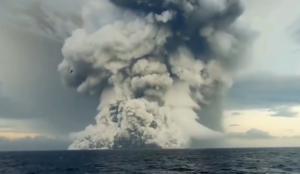 For some days it had become quite quiet around the island volcano Hunga Tonga-Hunga Ha’apai, but yesterday it reported back with a powerful eruption. The volcanic eruption is so strong that small tsunamis arrive on the main island of Tonga. The wave heights are a little less than 60 cm. This may not be much, but even small tsunamis can push a few 100 meters inland and cause damage along the coasts. But there are no reports about that at the moment. In any case, the region is on tsunami alert. The height of the ash column is impressive: according to VAAC Wellington, it rose to almost 18,000 meters. The last detected eruption cloud still reached a height of 15,000 m.