Christoph Weber arrived with a film team at the crater of O. Lengai 1100 on 02 February. C. Weber took scale of the the tallest hornito T49B with approximately 2890 m altitude (GPS) standing ~60 m above the crater floor at the NW overflow at 2830 m. No recent eruption had occured at T49B, but strong noisy degassing took place sometimes. Just east of T49B, the T56B hornito had convecting lava deep inside it’s cone and some lava flows only days old streched from three different vents at T56B towards the east as far as the E overflow. After the major collaps of T56B in 2004, this hornito (standing at approximately 2875 m altitude on 02 Feb.) has nearly grown up again to its former shape and altitude. Also from T58C and the collapsed T58B hornito some lava flows only days old were found on the eastern slopes passing the old and weathered T37, T37B and T45. The caldera shaped collapsed T58B hornito had it’s flat flour at ~2865m altitude with four active vents inside. Lava convection was close to the surface of T58B and depp inside the tall T58C at arrival (1100 hours) on 02 February.

At 1300 on 02 February a sudden increase of activity took place with two lava fountains at T58B lasting only some seconds. At the same time lava spilled out at all T 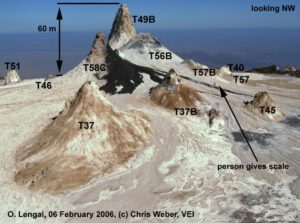 58B vents, a T58C flank vent to the east and at a T56B vent. A lava flow went from T58B ~50 m towards the east. Lava spatter with lava flows inside T58B caldera and up to ~150 m towards the east. Lava spattering and little flows at T58B occured as well the following 3 days. From 0500 until 0730 on 06 February higher activity occured with lava outflow at T58C. T58B showed also a higher activity level from than on until C. Weber and team left the crater on 07 February morning.

Lava temperatur was measured with 519°C at an Aa lava flow with cooled surface and not in motion any more. Fumarol temperatures were measured as well. During an observation flight on 13 February C. Weber noticed new lava flows from T58B and T56B vents.

With an excursion group Chris Weber started to climb O.Lengai with some local porters on 21 August early morning. With the knowledge of strong effusive eruptions inside the crater and because of clowdy and foggy conditions that day, the porters (some Masai and some of other tribes) were told not to enter the crater without a volcano guide. But some ignored the warning and crossed the crater by themselves, which caused a terrible accident at around 0800 that day. One local Masai fell into a running quite deep lava flow, more than 500 degrees celsius hot. Somehow he managed to get out of the lava, but leaving both legs and one arm of him completely burnt. Half an hour later Chirs Weber arrived with his group at the crater of O. Lengai. The well equipped group started first aid treatment and organized an effective and immediate rescue down the steep volcano slopes with the help of some tough men such as Burra Ami Gadiye and Othman Swalehe. After treatment in Arusha hospital financed by volcano Expedition Int., the Masai was on the way to recover mid of September, which is some kind of a wonder because of his severe burning injuries. 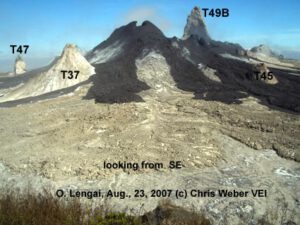 On 23 August Chris Weber and his group reached the crater of O. Lengai at 0815 again. Rough degassing natroncarbonatitic activity from several central vents took place this day. Lapilli and ash was even carried by the wind outside the crater onto the western climbing track. With very good weather conditions Chris Weber took an overview picure of the crater (see image) and a view from the the SE to the central area of hornitos (see image). This eruption period, which started on 20 June, had filled the collapsed central pit area completely with new lava. Some hornitos were grown up again at locations T40C, T52, T58, T57B and new located at T57C and all of those were active with lava degassing and being spitted out. Active lava lakes occurred futher more at the east side of the remaining fragments of the collapsed T49B hornito and at T49 location (see image). The most violent activity occurred on 23 August at T56 located lava lake with lava fountaining up to 40 m high and lapille thrown out even much higher. Lavaflows mainly to the western crater area accompanyed this activity. From 1200 until 1400 massive lava flows drained ouside the crater via the west overflow as far down the volcano slopes as 1500 m altitude.

Pambao: The expedition in August 2007 to the unusually active Lengai and then the terrible accident in the crater – a Masai porter fell into the lava flow.

Due to the high activity of the volcano, our climb of Lengai was viewed with concern by the Masai. Burra, my loyal companion in recent years, was coordinating and selecting the necessary porters for my expedition group. A young porter had introduced himself as “Pambao”. Although he hadn’t been to the volcano yet, he really wanted to earn the 50 euros for the job to safe it for his upcoming marriage.
During the night, all porters gathered and decided with Burra who had to do what. Water porters were the first climbing to the mountain and were therefore allowed to start at midnight. Due to the activity, my orders for all porters were strictly to wait at the edge of the crater and not to enter it. Also, because the camp site had not yet been pointed out which I would have done after my arrival at the crater rim. Burra translated everything very conscientiously, because he knew the guys very well. For the rest of us, including Burra and some porters for our luggage, the ascent began around 4 am. There was already daylight in the steep upper part when some water porters came down towards us in fear and panic. Burra listened to them and translated their confused chatter, that there was high activity because their god “Engai” seemed to be very angry and due to this an accident had happened. Then they continued their escape down the moutain.
We reached the rim shortly after. There was light fog at the edge where we had arranged to meet but nobody was there. Carefully we entered the crater, starting to walk around to the other side of it, while we heard the violent boiling of the lava from the center of the crater. Then next to a new lava flow we found two porters and Pambao lying on the ground. They explained, that Pambao broke into a 50 cm deep lava flow with a solid, rigid looking surface. Both of his legs to the thighs and one arm to the elbow got seriously burned. He himself was in a shock. Thanks to the nurse Moni in my team and my first aid, we put Pambao on pain medication.
I dindn’t give Pamboa a great chance to survive, but I decided to try everything possible. We built a stretcher out of walking sticks and tarpaulin, then my group members shouldered their own luggage and then descended. Only Burra, my cook Othman, and two “non-Masai” who hadn’t escaped the mountain, remained to bring this poor guy down. This was by far the longest, most strenuous and most dangerous descent from Lengai for all of us.
Pambao reached the hospital in Arusha by car and did miraculously survive financed by us and others. Including Othman we decided to climb Lengai one more time for a whole day, but without any porters.

The former common trekking route (track) up O. Lengai is not recommended so far, because of rockfall hazards and bad hiking conditions. We used a very steep route on the SE side (named “simba route”) of the volcano to climb up. From about 1000 m altitude volcanic ash-layers were clearly visible on the ground, but new grass had already grown since the eruption. At approximately 1500 m on the SE- volcano flank, all vegetation started to be covered (or being destroyed) by volcanic pyroclastics (“ash fall out”). From about 2500 m, additional impacts of volcanic bombs were visible. The volcano’s inactive south crater was the location of our camp site. All vegetation was whiped out and volcanic bomb impacts from the last explosive events on April 2008 were quite impressive to study (see images).

The active north crater of O. Lengai had a new morphology (map and the “cross section”). The diameter of the crater from N to S was 300 m and from E to W 283 m. The crater floor was at approx. 2740 m altitude, accordingly 130 m deep seen form the west crater rim (figure 6. gives scale). Two vents were located as c1 and c2 inside the crater and obviously not at older hornito locations. Both vents were dergassing with strong pressure and quite noisy. On 15 May a period of powder ash eruption started until midday. This happened again on 16 May, unknown which vent was responsible for this. After our descent we visited an abandoned Masai boma on the west side of O. Lengai. The “ash fall” forced the local family Lesele to flee from their home only a few kilometers away form the summit of O. Lengai.