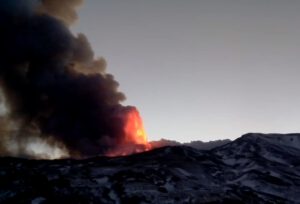 After Tuesday’s paroxysm, Etna is in a hangover mood today. The tremor has fallen to a multi-week low, moving at the base of the yellow range. The tremor curve gives a good indication of how short-lived the peak phase of the paroxysm was. This one was a moderate representative of its kind: the lava fountain reached a maximum height of just over 500 m and the main phase lasted less than an hour. What made the eruption special were the good visibility conditions and that it occurred at dusk. Accordingly, many media were shared in the social networks, some of which I would like to present to you here. From a posting by volcanologist Boris Behncke, it can also be seen that not only photos and videos were shared on social media, but also a lot of fake news that worried residents of the region. As spectacular as the paroxysm looked, it was not an unusual event that heralds a major disaster like a strong earthquake, or a flank eruption. A flank eruption will of course occur again sooner or later on Etna, and the Damocles sword of a strong earthquake always hovers over Sicily, but there is no direct link between yesterday’s eruption and possible tectonic earthquakes in Sicily.