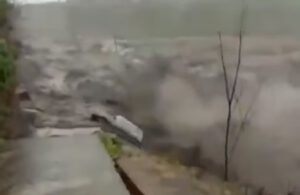 A lahar formed at the Javanese volcano Semeru the day before yesterday. The mud flow swept away a car and sank it in a riverbed near the village of Supiturang. The parked car was on a small path at the edge of the river and was loaded with diesel for mining machinery. The driver was in the sand mine on the slope of the volcano and remained uninjured. However, the fuel is believed to have been released and is polluting the environment. Sand mines are found at many volcanoes in Indonesia. Here volcanic sand is extracted, but also gravel for road construction.

Lahars are formed when water (usually as a result of heavy rainfall) mobilizes volcanic deposits on the slope.