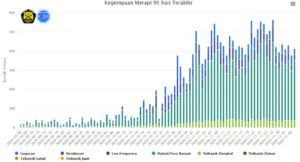 The situation at the Indonesian volcano Merapi (Java) is getting more and more dangerous. The BPPTKG confirmed that several geophysical parameters indicate that a magma body has detached from the magma reservoir at a depth of 5 km and has risen to a depth of 1.3 km below the crater. Electronic distance measurements confirmed the magma ascent. GPS data showed a daily inflation of 12 cm already in November. When the magma reaches the crater, the dome will grow dramatically. Satellites already observe a swelling of the ground on an area of 100,000 square meters. So far there are no signs that the ascent will be stopped. Compared to the end of November, the seismic activity has decreased somewhat, but is still at a high level. Around 400 vibrations of different origin are recorded daily. Hybrid earthquakes are strongly represented, but also flat volcanic tectonic vibrations. They occur when the magma ascent breaks up surrounding rock because the magma creates new space. The people at Merapi are facing turbulent times.