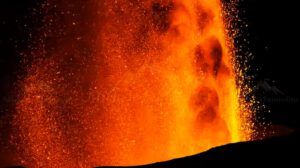 Tonight another paroxysmal spectacle occurred at Mount Etna, the most powerful volcano in Europe. The 23rd paroxysm -since December 2020- started around 1:00 UCT and lasted almost 2 hours. In terms of strength, it was comparable to the May 19 eruption, just did not last as long. New Southeast Crater produced a comparatively small lava fountain along with an ash cloud. According to VAAC, it rose up to an altitude of 6100 m. A lava flow headed south, emitting extremely high thermal radiation with more than 11,000 MW of power. As before, no lava flowed into the Valle del Bove. The vents to the east of NSEC were apparently not involved in the eruption. What will happen next is completely open. At the moment, it looks as if the eruption interval will shorten again.