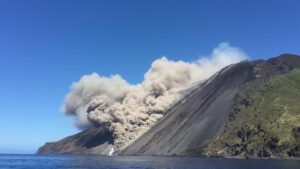 Stromboli experienced a collapse event at noon today that resulted in a pyroclastic flow. It flowed over Sciara del Fuoca and slid a good 1000 m out to sea. A few minutes earlier, INGV registered an increase in explosive activity.

It is reported that a lava flow is on the way on Sciara del Fuoco. A helicopter has left on an observation flight to gather more information. Slight inflation is registered in the area of the fire slide. It amounts to 0.2 microrad. Apparently there were several pyroclastic flows. The situation is still somewhat obscure.