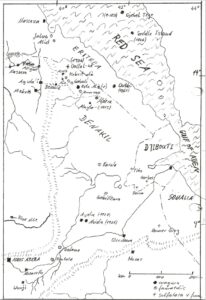 Erta Ale is part of  the Danakil range, which belongs to the 10.000 km2 Danakil depression,  an 160,000 km2 area of the African Rift system called “Afar triangle”, which occurred 60 million years ago. This geological still active African Rift system caused due to volcanoes and faults multiply cut-offs from the Red Sea 30,000-10,000 million years ago. This Afar  triangle, partly up to 120 m below zero, is an extremely hot area, so that seawater evaporated in the 60 °C desert, leaving former seabed sediments as well as  submarine volcanism, which  can be studied in the area today. In this Afar triangle, extensive flood basalt of alkali basaltic chemistry and trachyte mountains dominate the picture and created the Danakil range which lies on an N-S-fracture.

The volcano Erta Ale is a  broad, 50-km-wide isolated shield that rises from –50 to 613 m above sea-level and is  the most active volcano in the Danakil in recent times. The volcano contains a 0.7 x 1.6 km, elliptical summit crater (caldera) and another larger 1.8 x 3.1 km wide depression elongated parallel to the trend of the volcano range which is located SE of the summit. Fresh looking basaltic lava flows can be seen in the caldera and locally have overflowed its rim. Some recent fissure eruptions have occurred on the N flank. To the north of the summit caldera two long-term lava lakes have been active for 100 years or even more.

A large northern pit-crater of Erta Ale has been active possibly since 1906, at least from 1967 and has an average diameter of 350 m. From 1959 to 1960 there have been occurred  large fissure eruptions. An active lava lake has been eyewitnessed by famous volcanologist Tazieff in 1968 and the adventurer Rüdiger Nehberg discovered  in 1970, that the N-pit had risen over the edge floating outside. In 2008, the N-pit collapsed and since then lava flows have poured out into the crater’s interior from time to time.

In 2002 for example a south-pit-crater measured around 160×120 m wide, with an 90 m wide active lava lake inside approximately 80 m below the crater rim. There were also phases (2004/2005) where the lava lake had a closed, cooled “lava lid”. By 2010 the lava lake had filled part of the S-pit-crater and five years later the entire S-pit was filled up, releasing lava flows outside the pit into the vast caldera towards the south. The lava lake temperature was measured at a max. of 1187 °C. 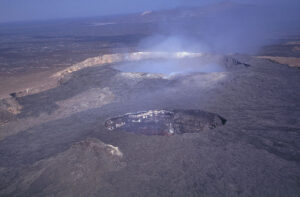 We were nine German expedition participants traveling in an old MilMi17 military helicopter of solid russian construction on our flight from Makale at 2100 m to the Erta Ale shield volcano, 610 m high in the Danakil, one of the hottest deserts in the world, which is located in the Ethiopian Afar triangle. On board this military helicopter were the pilots and soldiers, our Ethiopian tour guide Kedir, the cook Hasan, an armed Afar, around 2 tons of equipment, food and water for 6 days. Marc, our cameraman, was sitting by open sliding door of the heli and securely fixed with a rope, so he couldn’t fall out as the heli turned around. After tuff days had passed, we finally managed to have our goal in focus.

For the expedition leader Chris, the way up to this point went through negotiations and payments with the military for the air transport in Addis Ababa, the land transport with four 4×4 cars plus personnel and for the procurement of equipment. After this followed a grueling and failed approach through Danakil desert and through Afar area to Erta Ale on a land route.

The local Afar didn´t allow us to proceed for whatever reason. So we had to change our plans and use the direct airway to the volcano. 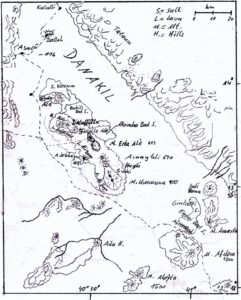 Since the Ethiopian military and the Afar tribe in the Danakil desert were often enemies of the war, our military helicopter was of course not appreciated to be seen over the Erta Ale, so the pilot flew the heli in low-flight to the volcano from the sparcely populated north. Then it was quickly unloaded and the helicopter flew away, with an appointment to pick us up again after 5 nights. At 40 degrees Celsius, the transport of the equipment over shaky and very fragile lava fields to a suitable camp site was hard work. For security reasons we were hiding some water, documents and money in rock places, right after we went to explore the active lava lake profoundly.

The geological situation was as described in recent reports. The lava lake occupied about half of the crater, and the lake surface was approx. 90 m below the W rim of the S-pit crater. The remaining area in the E was covered by basalt that had a terrace (T) 45 m below the crater rim. Previous observations had located the terrace at 70 m below the rim. It was widely covered with talus; hence, the lava lake must had risen up to the present terrace level between spring 2002 and our visit. Almost no talus was found on the terrace, indicating that the lava cover was not old. Actually lava fountaining up to 20 m high occurred out of the crater lake.

We set various anchorages for a pulley system to rope down into the crater to the first terrace (T). Chris was the first to climb into the S-pit to clean the route from loose rocks. The goal of the effort was to reach the terrace and take a lava sample from the approx. 45 m deeper lying lava lake by fishing technique. When cameraman Marc had roped down into the crater to document the action, the crater edge suddenly broke off from above over a distance of perhaps 30 m. Luckily most of it fell into the lava lake.

But as some rocks of the break out unfortunately crashed onto the terrace, Marc and Chris jumped away from the spot and away from the lava lake edge, from which a huge cloud of dust rose up. We were convinced that it was a unique case, but nevertheless we quickly finished filming to get out of the crater. When Marc was hanging on the rope for the ascent, another 20 m wide rock package crashed into the lava lake and onto the platform again. Luckily both of us made our way up. After that second rock fall all other documentations were taken from the rim of the crater, as well as from the N-pit-crater and outside the wide caldera. Then our helicopter appeared as agreed. We packed everything up, made an extended sightseeing flight over the Erta Ale, then along the Danakil Range to the north to the volcano Dallol with a stop-over and finally to Makale. 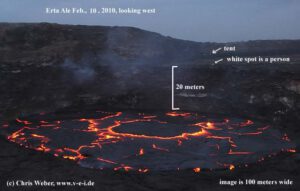 From 8th to 11th February 2010, Chris was back at Erta Ale with an expedition group, like he had been in 2009 as well. For expeditions Erta Ale range had always been approached from the west side where the sand desert meets the lava flows of Erta Ale around 50 m below sea level. A high base camp already 150 m above sea level was reachable by 4×4-car and the ascent to the edge of the caldera had to be continued on foot in around four hours in the relatively cool nighttime. While the descent back to the basecamp could be done in 3 hours, depending on temperature which could rise up to 50 °C in daytime at Erta Ale range.

The situation at the two active craters had changed quite a bit. The larger N-pit-crater to the north of the caldera had collapsed in 2008 and been refilled with many lava flow events since then. Lava spatter (about 15 m high strombolian activity) took place at a central located hornito in this N-pit once every day during our observation. Short lava flows occurred from this hornito towards the east and south inside the N-pit.

The elliptic S-pit still measured with about 180 m EW and 130 m NS. The upper platform (terrace T) inside the crater was  overflown by young looking lava flows. Now the lowest point from the lava lake surface to the crater rim was only about 20 meters on the W side. A 65 m wide active lava lake was located in the western half of the S-pit. Fountaining at this lava lake took place most of the time during observation, occasionally higher than the crater walls. Fresh lava spatters were found at the craters west edge.

Chris again had brought rope equipment to make an attempt to climb down into the S-pit. Since the first platform (T) was not 30 m below the old rope anchors, it seemed to be possible. Well, he managed it and got lava samples and very nice film documentations. One day later this platform (terrace T) was completely flooded with lava.

The following references have all been used during the compilation of data for this volcano, it’s not a comprehensive bibliography.