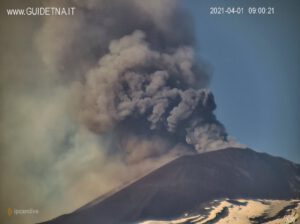 The 17th Etna paroxysm is occurring at Etna in Sicily this morning. The volcanic eruption is different from its predecessors this year. Already in the warm-up phase, a lava flow began to flow yesterday morning, originating from a production vent at the base of the New Southeast Crater Cone (NSEC). Earlier, explosive activity from the summit craters was already increasing. The tremor rose slowly and accelerated its increase in the evening hours. Since then it has been steadily increasing and in parallel the activity increased. Currently (9:15 a.m. CEST), an ash cloud is being produced. VAAC detects ash at 6700 m altitude. The wind is moving it in a southerly direction towards Catania. At night, glowing lava fountains were visible on LiveCams. There are 2 major lava flows. One pours directly from the NSEC and flows towards Valle del Bove. There the lava flow of yesterday finally lands. It makes a detour over the southeast.