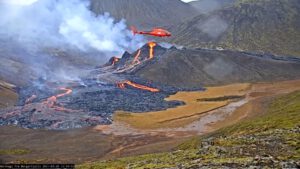 Last night, the expected volcanic eruption began in Iceland. Although it was known that magma was accumulating underground, the start last night, at 20.45 local time, nevertheless came as a surprise, as all parameters actually pointed to relaxation of the situation. In the Geldingadali valley, on the southeastern edge of Fagradalsfjall, a 500-700 m eruption fissure opened. A series of smaller lava fountains emerged, feeding 2 lava flows. Yesterday evening the eruption was still relatively small, just as volcanologists had expected. There have been no major explosions so far, it is a purely effusive eruption. Ash clouds and an accompanying impairment of air traffic are not expected. However, Keflavik Airport could be affected, as it is located only a few kilometers from the eruption site. The greatest impairment is likely to come from gas emissions, which are often associated with fissure eruptions. Especially in the valley where the eruption is taking place, life-threatening gas concentrations could result if there is no wind. However, it is almost never windless on Iceland.