The 2nd part of Chris Weber’s Ol Doinyo Lengai report describes what happened at the volcano in Tanzania, between the years 1996-2004. 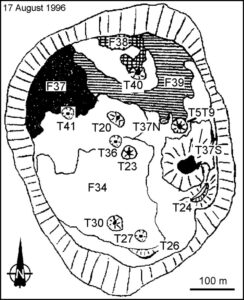 Christoph Weber climbed Lengai on 17 August and he observed a lava fountain up to 3-m-high on T37. During his entire time of visit lava still poured out. Beside activity at T37, Weber saw some quite fresh black Aa and Pahoehoe lava flows on the crater floor. He estimated the thickness of the fresh flows as typically 20-30 cm. Fresh flows were easy to distinguish because they may change from black to grayish white as they cool within days. They were often stacked, particularly on flow field F37, the one most active at that time, forming a composite of new flow material about a meter thick overall. Because of the rough irregular surfaces on some flows, their contacts with successive flows often contained considerable void space. Many of the flows were tube-fed, the tubes typically being 10- to 150-m long.

Observation of the crater from 6 August 1998, 0800 until 7 August 0800 by Chris Weber. On 6 August at 0800 an eruption started at hornito T37N1. This hornito has a platform about 5 m above the surrounding area while it is highest peak at the northern flank is about 8 m high. A little splatter cone had build up on this platform where foaming white to pale grey carbonatite lava splashed out and fed short lava flows with a few meters length down the west-slope of T37N1. Most of the lava went into older lava tubes west of this hornito. The vasiculation of the gas rich lava was high. The activity stopped around 1100 with a 4 m drop of the lava level in T37N1.

On the same day at 1400 lava splashed out of two openings close to it is peak of hornito T48. The black degassed very liquid lava fed little lava flows reaching 8 m of length down the east-slope. The activity stopped shortly after 1600.

On 7 August at 0408 a loud explosion blew of the top and northside of hornito T49 after several earthquakes during the night. The earthquakes seamed to have shallow and deeper hypocenter in the volcano. Rocks of this hornito up to 1 m3 were thrown or rolled a few meters to the north by this explosion. Right after the explosion a lava fountain (fire curtain) approximately 15 m high continued until 0413 with a loud turbojet-noise. Pahoehoe lava with little viscosity (1-5 Pa s) which splashed down north of the hornito traveled fast to the north and west.. The 10-20 cm thin flow stopped moving shortly after the end of the eruption. The amount of erupted lava was about 70-100 m3. Lava pearls up to 4 mm diameter and fine ash were transported at least over 200 m by the wind in northwest direction. The fountain had a dark red glow. The hornito lost less than one meter of the 6 m elevation., whish it had before the explosion.

At 0615 on 7 August hornito T44 started activity for an unknown time. Black liquid lava splashed out of it is 6 m high peak and splattered on the flanks of the cone. No lava flow was observed until 0815.

T40 degassed with mild turbojet-noise. The lowest point [ X ] of the crater-rim over the crater-floor in northwest was 20 cm. 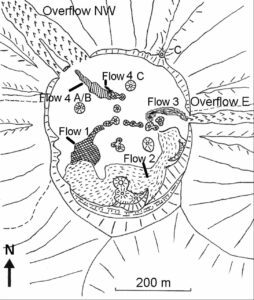 Eruptive activity: On 3rd Oct. from 1200 until 1350 hours spattering occurred in the saddle between T49 and T49B out of a small vent. Two little lava flows were observed at the northern and southern flank of T49 during that time. At 1350 the west side of T49B collapsed and released out of an approximately 6 m wide and 5 m high gap a sudden flash flood of lava. Parts of the collapsed wall of T49B were washed towards the west as big blocks. Within a few seconds the flow had reached halfway between the cone and the NW Overflow. After 5 minutes the flow had reached its final extent about 40 m short of the NW Overflow (See map of flows: Flow 4A). The lava flow was up to 5 centimeter thick and later Aa flows were several decimeters thick.

Until 8th Oct. lava spattering and many small lava flows (formed from overflowing the vent, as spatter fed flows or emitted from small new vents and fissures) had nearly closed the gap in the west wall of cone T49B. Only close to the top of T49B spattering occurred on the evening of 8th Oct. On the morning of 9th Oct. at 1035 hours nearly the same west flank of new lava collapsed in the same manner as on 3rd Oct., leaving a 7 m wide and 7 m high gap. Lava went in a flash flood within seconds towards the NW and stopped just 10 m before the NW Overflow. The flow covered the Flow 4A and is shown in the flow map as Flow 4B.

During the afternoon of 9th Oct. T48 had strong degassing and for only 10 minutes ejection of tear-drop lapilli occured. After this event T48 went quiet for the rest of our visit. Right after sunset of 9th Oct. at 1810 hours a crack opened at the SSW base of T49C with a sudden noisy gas jet followed by a 10 minutes spraying of lava droplets and sperical lapilli up to approximately 10 m high. A small lava flows (Flow 4C) were emitted too and moved NW. From there on until our descent on 11th October no flows were observed, meanwhile the lava lake inside T49B was still in motion and heavily splashing and degassing.

Accident: Jürgis steped into a little lava flow in October 2000. 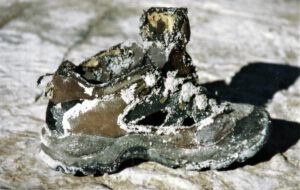 In the evening Oct. 3rd, 2000 small lava flows were to be seen again at Hornito T49, so that I called the geologist of the IMPG team, Jürgis Klaudius, who was already resting in his tent, to have a look. He was curious and to hurry up, he put on his sneakers instead of his mountain boots, and jumped out of the tent. We went to the lava flow in the dark and then a scream from Jürgis followed. He briefly had stepped into a 20 cm high lava flow at a temperature of about 500 degrees, which was flowing across a flat terrain and just looking black in the dusk. All light plastic and gorotex parts of his sport shoe were burned, the leather parts and the sole were left as a framework.
The consequences were quite fatal. Despite my good first aid and quick treatment of the burned injuries, Jürgis had to be evacuated from the mountain after two more days with his infected foot on 6th August. Since an attempted air rescue by heli failed because of non capacity, only the rescue down the steep mountain slope remained. In the steep upper part, over 45 degree, Jürgis had to slide down on his butt with his injured foot forward wrapped into bandage. This was painful and distroyed his trousers. In the middle of the way down, two of us gave him a support and when it got flatter, the four of us rescuers shouldered the tired man piggyback changing every 10 minutes one after another. For this descent we needed about 8 hours instead 4 hours or so.

Following, Jürgis, me and driver Mike had an 8 hour drive through the night into hospital in Arusha. Next morning I had already rebooked the flight from Jürgis towards Germany and then Mike and I started our journey back to the Lengai, where I made the ascent with a load of 30 kg luggage early in the following morning. Later on when Jürgis had returned to Germany a succesfull skin transplantation took place. Luckily everything went fine again without immobility consequences.

By the arrival 18th June the fresh looking and still black lava flows were visible from T49B on a length of 120 meters towards western directions. From T46 black lava flows streched towards NW, W, SW, and South on a length of 20 to 80 meters. The hornito T37B was covered with still black lava and propably had erupted recently. The flanks of T48 as far as to T44 were covered with black lava lapilli also propably from recent activity. The diameter of the T49 base (eruption center) increased strongly compared to august 2001.

A new eruptioncenter was clearly visible half way between T46 and the West overflow an could be numbered as T54. The eruption site of T54 was an open lava pond with an overflow of about 40 meters towards the west. Black lava had covered older lava flows who had left the crater on his west side in Febuary 2002. A lava lake bubeling deep inside T48 was clearly heard during the days of our observation. The fumarolic activity and its temperature (> 125°C) increased also from summer 2001 until summer 2002. Three recognizable relativly deep released single vibrations occured during our visit 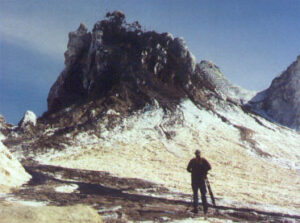 Activity and small lava flows were observed from T49B. On 18th June lava spattering from the top of T49B went on in intervals of intensitiy from 14:00 until 19:00 hours. The maximum height of the lava fountains of was arround 3 meters. A litle lava flow went from the top towards the norh east for about 50 meters. During the day of 19th June spattering occurred with a duration everedge of 30 minutes followed by one and a half our breaks of now activity until 04:15 hours in the afternoon. No more activity outside hornito T49B and other hornitos was observed until 22nd June. On 22nd June arround 10 m3 collapsed from the wall below the summit of T49B into the crater. 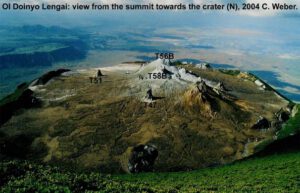 On 10 February 2004, Chris Weber and others visited Lengai for 5 days. The summit of the tallest hornito in the center area of the active crater at Oldoinyo Lengai was at approximately 2886 m altitude (GPS), standing about 33 m above the surrounding crater floor to the north. This tallest hornito at the T49 location (T56B) was not active anymore, while T48B (T58B) had a lava lake deep inside it’s hornito, clearly indicated by noises and tremor. The activity had changed to the common effusive and lava lake activity. This occured at the old T49 eruption center, also indicated by the activity of T49B during observation and an active new vent (numbered T49G by C. Weber) at the north flank of T49 (T56B), about half way up from its base to the north side.

This new activity propably caused two collapses (depression) in the north flank of T49 (T56B), already visible since January 2004 (first described by B. Donth). The T49G vent, hosted at the upper collaps, had a steady degassing lava lake with many overflows during the visit of C. Weber. Lava penetrated the lower collaps at T49 and lava flows reached as far as to the NW overflow. On 12 and 13 February T49B spattered lava for some hours, feeding lava flows to the west (T51), finally escaped into a lava tube system. The lava temperature very close to the lava lake was measured at 588°C. Aa lava flows not in motion anymore at flat terrain were measured between 480°C and 500°C.