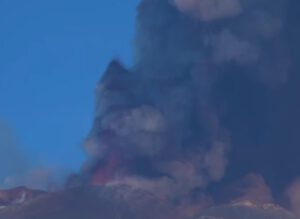 The 12th consecutive paroxysm on Etna began this morning. Activity began to increase significantly around 7:30 am. Already half an hour later, a lava flow began to emerge from the New Southeast Crater. In the meantime, the paroxysm has reached its peak.

You can see from the broad tremor base that the paroxysm was increasing comparatively slowly and has now been going on for quite a long time. It looks like it peaked at 10:30 CET (9:30 UCT). The tremor amplitude has risen even a bit higher than during the last paroxysms. Once again, the eruption takes place in unusually good weather. There is almost no wind and the eruption cloud rises vertically. VAAC Toulouse detects volcanic ash at 10,400 m altitude. On a thermalcam, one can see the lava flow that has descended far into the Valle del Bove. Obviously, however, there is only the lava flow in the eastern direction, no lava seems to be on the way in the south.