The small town of Arusha (1200 m) in Tanzania was the starting point. From Arusha I took a public bus to the village of MtoWa Mbu about 100 km northwest, even partly paved. The next day journey was not so easy to get organized. So, I went to the village pub for a beer and a couple of darts games. My search for tranport got public and before dinner, I had arranged a lift. The next morning I got up with the first light and went out on the street of the village as agreed. After waiting for over an hour – I had forgotten to set the clock to “Tanzanian” time – a guy came running along and pointed to a scrap-looking Toyota pickup truck that was loaded with many goods. Well, ok. From MtoWaMbu we turned north on a bumpy dusty road and followed it to the Masai village of Selela and further on to Engaruka. Changing passengers jumped on and off, all finding uncomfortable space on the loading. This was an important service for the villages along the route to get goods and transportation.

Behind Engaruka there was no more settlement and more and more wild animals like zebras, giraffes and antelopes appeared in the open gras plains. The Toyota got stuck more and more often in the deep dust. When the driver tried to get it out, the engine of the old car increasingly failed by overheating. The rift shoulder rose steeply to the left and the stratovolcanoes Kitumbeine, Karimassi and Gelai (2942 m) could be seen to the north. In the evening after countless breakdowns, we – driver, assistant and I – gave up reaching our final destination, also because orientation was very difficult in the dark. The driver allowed us to approve a few beers, because we had no food at all. After that we fell asleep easily, lying peacefully on a tarp under the starsky, despite of scorpions, poisonous snakes and lions. We had at least reached the eastern slopes of Oldoinyo Lengai. The next morning the dust swallowing and shaking came to an end after 24 hours on the 150 km stage. Near Lake Natron (610 m) was the small Masai settlement Engarosero, where I got unloaded from the Toyota together with four live chickens, 2.5 crates of beer, many crates of Coca Cola, all kinds of plastic goods and equipment. I was welcome by the Siningo family in a simple campsite near to the village.

I got ready to set off for the summit of Lengai in the morning with a 25 kg backpack including 6 liters of water and a lot of useless equipment. The Masai told me, that it was customary to take a guide up the mountain. Well, I smiled and declined with many thanks, because I thought the mountain, which had been described in some literature as unclimable, was relatively easy in terms of commonly mountaineering experience. The Masai laughed and let me go.

The temperature was still pleasantly fresh in the morning, but that changed brutally around noon. In a dry river canyon I found a place in the shade – luckily without cobras and scorpions – to rest and save water. After the midday heat, I continued to climb through sticky annoyingly high grass and came across car tire tracks at approximately 1300 m. Great, but sadly I didn’t have a car. From there, the stratovolcano Lengai rose noticeably steeper on an increasingly narrow mountain ridge. Meanwhile deep canyons, that had been washed out by the rare rain in the relatively soft rock of the volcano, occured to the right and left hand side.

Night was falling, but thanks to the full moon, I was able to continue climbing without a headlamp. Despite the relative coolness of the night I was quite thirsty and sweated a lot, which was due to the steep upper volcanic flank of over 45 degrees. Then finally I reached the 2830 m high crater rim at the west side. But my enthusiasm didn’t last long, because seconds later , I found myself 2 meters deeper in a mountain crevasse that I had overlooked in the dark. Fortunately, apart from bleeding scratches on the legs, the fall went off lightly.

After this incident, I was able to enjoy the activity spectacle in the crater of Lengai for the first time. The moon had set, but in the large crater – from a size of a sports stadium – were clearly visible half a dozen of hornitos, or tall hills. The lava of the crater looked like white snow, with only a few black spots in between and suddenly, I saw a faint shimmer of red in a black lava flow. Liquid lava, only some hundred degrees hot. The source of it became evident as lava boiling and bubbling more and more violently behind a small lava dam. It hissed, gurgled and cracked softly but also somehow frightening. I climbed very carefully into the crater and approached the fluctuating activity at dawn. After exploring and taking a few photos, I used the cool morning for the descent, which didn’t take long but seemed endlessly long without water through the dry and increasingly hot savannah. In the camp, I reported about my success and the activity of Lengai, which was taken with respect by those people who came across.

The Oldoinyo Lengai is located in the East African Gregory Rift in Tanzania at 2,751 latitude south and 35,902 longitude east. The current height of the stratovolcano is 2960 m.

Its mountain base is located in the bottem of Rift Valley at approx. 600 m altitude, with a western connection to the over 2000 m high valley shoulder. The steep volcano slopes run into Lake Natron in the north, which extends to the border with Kenya and further on.

The age of the Lengai is about 370,000 years, so far behind the last major folding phase of this part of the East African Rift 1.2 million years ago, in which several carbonatitic volcanoes were formed.

The older part of the Lengai is the dorment south crater. It erupted yellow tuffs 370,000 to 150,000 years ago. The young and still active part is the north crater. It initially ejected black tuff until around 1,250 years ago. Then the eruptiones of natron-carbonatitic lava began, which has filled the crater with mostly high viscose lava flows. For the Masai tribe living arround the volcano, Lengai is sacred mountain and the seat of their creator Engai.

G. Fischer was probably the first European to penetrate this volcano in 1883, which is located in what is now Tanzania. The first scientific report on the crater and its special lava was provided by F. Jäger in 1904. Reck made the first photographic report in 1914. From then on, several expeditions visited the Lengai, although it was not the frequently climbed volcanoes in the 19th century due to its remoteness and difficult access.

The first dated major explosion of the previous century occurred in 1917. Ashes (tephra) were thrown nearly 50 km into the surrounding area and lava flows reached the base of the volcano. This eruption was numbered with the Vulkan Explosiv Index (VEI) 3.

In 1923 A. Barns observed night glow over the crater and in 1926 another explosive eruption occurred, also observed by Richard in 1940 and 1942 – for weeks, ash clouds rose over the volcano after violent explosions (VEI 3).

On August 9, 1966, what is probably the most serious explosion in historical times occurred. An ash (tephra) cloud rose over 4,000 meters into the sky and ash fell 200 km away. There were no major explosions between 1967 and 1983.

Since 1983 until today, many effusive and smaller ash (tephra) eruptions, only interrupted by a longer rest period from 1993 to 1994, have almost filled the crater. From 1999 the overflow of lava began until another very explosive phase occurred in 2007/2008. Since then, the over 130 m deep crater that was left, has been backfilled again with effusive lava. 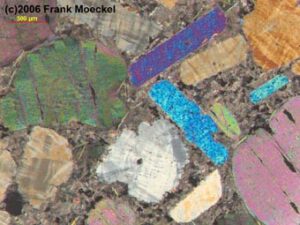 Soda carbonatitic (alkali carbonatitic) minerals: Nyerereite (Na0.82K0.18) 2Ca (CO3) 2 and Gregoryite (Na0.78K0.05) Ca0.17 (CO3). This non-silicate magma is a mixture with sodium-calcium-carbonate. The inclusion of bubbles is caused by a high proportion of dissolved CO2. The temperature of the melt is relatively cold at around 600 ° C from an igneous point of view. This temperature is just enough to cause a red glow at night. The viscosity of the melt is 1-5 Pa s (basalt has approx. 100-1000 Pascal sec., Water 0.01 Pa s) and reaches flow speeds with a slight gradient of 10 km / h.

Table 1. Lava temperature measured by a digital thermometer (TM 914C with a stab feeler standard K-Type). The instrument was used in the 0-1200 Celsius mode. Calibration was by the Delta-T ethod: values are +/- 6°C in the 0-750°C range, with at least 4 different measurements at one spot. These temperatures compare well with the range of the first temperature determinations on natrocarbonatites of 491-544°C by Krafft & Keller June 1988 (Science vol. 245, 1989), although occasionally higher temperatures up to 588°C have been obtained in the eantime.” Courtesy of Christoph Weber.