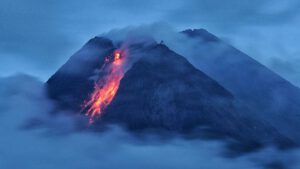 VSI volcanologists report that during recent fieldwork at the summit of Merapis, they discovered a second lava dome in the crater of Merapis. It is growing in the central area of the crater and is only slightly offset to the south. Due to cloud cover, the researchers were unable to determine the volume of the new dome. It is still supposed to be quite small. But in the future pyroclastic flows could flow in a direction that has been spared from them until now. Until now, it was mainly places in the southwest of the volcano that were threatened. Hanik, the head of the local disaster protection, explained that now not only Kali Boyong, Krasak, Putih, Bedog and Bebeng are threatened, but also the region around Kali Gendol.

At last, new data on the dome so far have also been published: its volume is 117,000 cubic meters, with a daily growth rate of 13,000 cubic meters. Pyroclastic flows and debris avalanches have recently been greater than the growth rate, so the dome has lost more volume than it has gained. In fact, the data are similar to those last communicated 2 years ago.