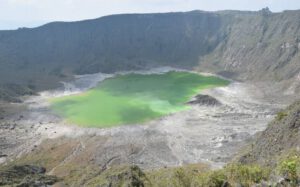 El ChichónMexican volcanologists are concerned about the development of El Chichón volcano: since December 25, 2020, 41 earthquakes have been detected in the area of the volcano. The strongest earthquake brought it to M 4.1. The scientists installed 8 new temporary measuring stations to better monitor the seismicity.

The researchers’ concern is not unfounded: El Chichon proved responsible for one of the most devastating eruptions of the 21st century when it produced a Plinian eruption in 1982. More than 2000 people were killed. The volcano lost 200 m of height and a caldera formed in the summit area.