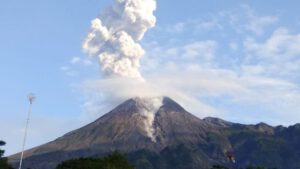 In the early morning hours today, a pyroclastic flow descended from Merapi on Java (Indonesia). It flowed through Kali Krasak and covered a sliding distance of about 1500 meters. Volcanic ash rose about 500 m high and drifted in an easterly direction. The seismograms registered a signal with a maximum amplitude of 60 mm and 150 seconds duration. Yesterday, seismicity picked up again somewhat and 200 shocks were detected. Among them were some hybrid and volcanotectonic earthquakes. There could be 2 reasons for the general downward trend in seismicity: either less magma is rising, or the ascent paths are clear. The latter would result in faster dome growth. The pic comes from the archive.