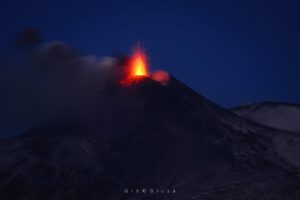 Sicilian Etna is very hot today, emitting heat with a power of 203 MW. Currently, on the thermalcam, you can see that a lot of glowing tephra is on the way on the eastern flank of the southeast crater cone. Strong strombolian eruptions from Southeast Crater were photographed again tonight. In addition, Voragine and Northeast Crater joined in. Such intense summit activity from multiple craters is not produced by Etna every day. Moreover, the activity could increase to a paroxysm. The tremor is on the border of the red zone. Seismicity is dominated by the shallow earthquakes east of the crater that I reported on yesterday. There seems to be some magma on the way here.