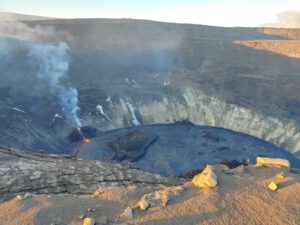 At Kilauea in Hawaii, the lava lake continues to be active and its level has risen. Latest measurements showed a depth of 192 m. Thus, it rose 2 m above its edge, which is defined by a crust of solidified lava. Accordingly, the deflation is increased. Its dimensions are 720×560 m. The lava lake is fed from 2 vents on the west wall. A hornito has formed on the upper one, which has continued to grow. The HVO describes that strombolian lava patterning is observed there. The lower vent is below the lake surface and produces much more lava. It produces a dome-like bulge in the lake surface. Seismicity is slightly elevated and tremors are recorded. Approximately 3500-6500 tons of sulfur dioxide are emitted daily. This is in the range of the 2018 lava lake. MIROVA registers very high thermal radiation. It is mostly above 2000 MW power.