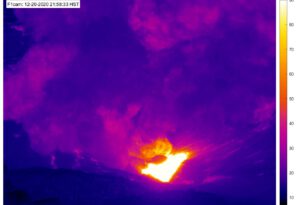 At Kilauea in Hawaii an eruption has apparently started today! On various livecams you can see bright luminous phenomena coming from the Halemaʻumaʻu crater. Included here is a live image from the ThermalCam. I am collecting more information and stay tuned with new information!

Update 10:00 a.m.: Although official reports from volcanologists are still pending, it is safe to assume that a new volcanic eruption has indeed begun on Great Conjunction Day. All live cams with a view of the summit caldera show red illuminated steam clouds rising from the Halemaʻumaʻu crater. In addition, seismicity is significantly elevated, although without a massive seismic crisis. It is likely that the magma is leaking that intruded earlier this month and caused inflation of 12-14 µrad.

What happened to the crater lake is unclear so far. Strong phreatomagmatic eruptions do not seem to have occurred so far. Maybe it simply expired before, or evaporated.

On the thermalcam you can see that right now a new vent has opened in the crater slope and lava is being erupted. The situation is very dynamic! A new lava lake could be formed.