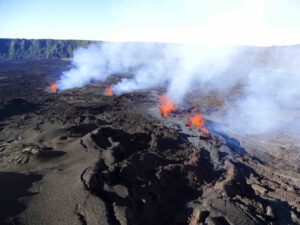 Tonight began the long-awaited eruption of the Piton de la Fournaise on La Réunion. At 04:40 (local time) volcanic quakes occurred, which marked the beginning of the eruption. Prior to this, there was a seismic crisis lasting more than 2 hours, which was accompanied by rapid ground deformation. It was caused by the magma rise. The volcanologists of the OVPF flew with the helicopter to the eruption site and were able to locate the eruption fissures exactly. Over a total distance of about 700 m three fissures opened. They are located on the west-southwestern flank of the volcano, at an altitude between 2300 and 2190 m. At the time of the overflight, between 7:00 and 7:30 local time, the three fissures were active and ejected lava fountains about 15 meters high. They fed a lava flow. The flow front spread only slowly and was at about 2120 m altitude.