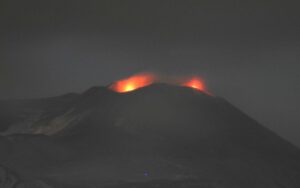 Dr. Boris Behncke photographed Etna last night and reveals in his pictures that in the east of the New South East Crater the vent called “Puttusiddu” has become active. It produces small strombolian eruptions. In addition the larger saddle vent is active.

On the previous day a weak earthquake of magnitude 2.5 occurred, with a depth of 9 km. The epicenter was located 6 km north of Paternò. The Salinelle di Paternò has been in the focus of news coverage in the last few days because of the increased hydrothermal activity.

Already during the weekend the persistent clouds cleared briefly and revealed a snow-covered Etna together with strombolian eruptions from the New South East Crater. The tremor moved temporarily in the red range. We can assume that the activity will continue.