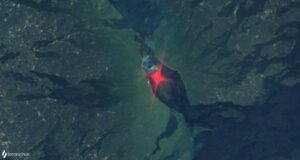 A new lava lake probably formed at the Ethiopian volcano Erta Alé. This at least suggests a thermal anomaly, which can be seen on a Sentinell satellite photo since yesterday. According to MIROVA, thermal radiation with a power of 103 MW is emitted. The anomaly was detected for the first time on 28.11.2020 at 10.45 am. At that time it had an output of 131 MW. In the days before it was cloudy from time to time, so the activity might have started earlier without noticing it. The last time a thermal anomaly was recorded was in September. However, it originated from the North Crater and not from the South Crater as now. Comparing satellite images from now and October, morphological changes in the North Crater can also be seen.

There are two reasons why traveling to the region is currently out of the question: Because of the Corona-related travel restrictions and the civil war in the Tigray region. The regional capital Mekele is not only the focus of the fighting, but also the gateway to the Danakil desert, where the volcano is located. But more about that soon in a special report.