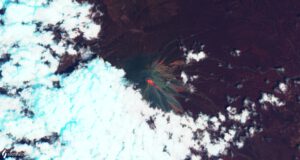 The Indonesian volcano Semeru is located on the island of Java and forms a volcanic massif together with Bromo. Since months Semeru is effusive and explosive active. It is busy building on its flat pancake dome and strombolian eruptions are occurring, and debris avalanches are taking place. What has not been communicated so far is the fact that a lava flow has been flowing for about 2 weeks. It comes through the breach in the southeastern crater wall and is moving along the upper part of the flank. It has a length of 800-900 m and should be quite viscous. Since when exactly it is on its way remains unclear. I discovered it on a satellite image from November 16. On a picture from November 11th it was not yet visible. In the reports of MAGMA/VSI it is mentioned that the southeast side is restricted area and that pyroclastic flows may be released. During earlier eruption phases these occurred especially in connection with the high viscous lava flows.