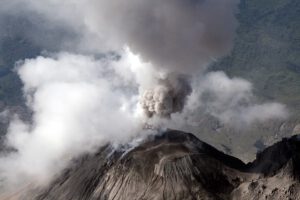 The volcanologists of INSIVUMEH (Guatemala) published a new report on the activity of the dome volcano Santiaguito: The seismic record allows the observation of weak and moderate explosions. These generate columns of gas and ash, and heights of up to 3100 meters (10170 feet). Avalanches of blocks and ashes are also registered mainly towards the southwest flank, however these can be generated towards the south, southeast and west flanks. The path of such material reaches the base of the dome and causes fine ash particles to fall on the volcanic perimeter. Due to the location of block lava flows in the dome of the hot dome in a west-southwest direction, the occurrence of block and ash flows in this same direction, as well as long range pyroclastic flows, is not ruled out. For short periods of time it is possible to hear aircraft turbine like sounds due to the prolonged degassing in the hot dome. MIROVA registered a thermal anomaly with 11 MW power.