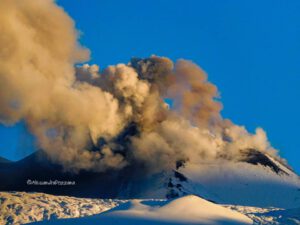 Etna celebrated the new day with another ash eruption. Place of the happening was again the New South East Crater. The ash rose a good 200 m and was carried by the strong wind in southwestern direction. The VAAC gave no warning. Previously, the tremor decreased significantly during the night and is now fluctuating in the middle of the yellow area. The earthquake activity was quite high on November 21 and 22. SismoWeb (INGV) shows 26 quakes for the two days. Many manifested themselves under the central crater area and in the Valle del Bove. The strongest quake reached M 2.5 and was located at 5 km depth near the village of Zafferana on the eastern flank. It continues to accumulate magma under the volcano.