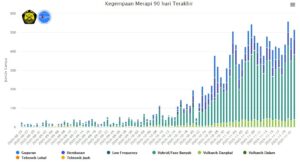 The seismic activity at Merapi remains at a very high level. Yesterday about 510 tremors occurred in connection with the dome growth. This was the third highest value in this growth phase. First place was taken by November 20 with about 560 seismic signals. In the first 6 hours of today 83 hybrid earthquakes and 5 volcanic tectonic quakes were recorded. In addition there were 23 signals caused by strong degassing and 10 quakes caused by rockfall/debris avalanches. The dome continues to grow busily. The danger of pyroclastic flows is high.

Already on November 7, 133 people were evacuated. They were mostly elderly people who are not able to escape spontaneously. Prior to this, the alarm status was raised to “3”.