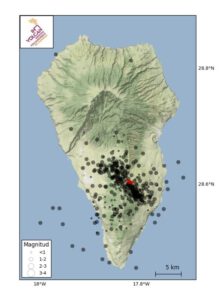 Already on Saturday, the Volcanological Institute of the Canary Islands (INVOLCAN) has detected more than 50 earthquakes of low magnitude under the volcano Cumbre Vieja. The epicenters of the swarm were mainly located in the north of the volcano. They gathered in an elongated cluster that extends in a northwest-southeast direction. The hypocenters of the quakes were located at depths of around 30 km and thus in the area of the asthenosphere from which magma likes to rise into the earth’s crust. The strongest quake had the magnitude 1.2.

The scientists of INVOLCAN, however, reassure the population and say that the earthquake swarm is not a threat and that it does not indicate disturbing changes in the volcano. However, it should also be noted that increased carbon dioxide emissions were already registered in August. The quakes could well be related to magma intrusion.

Not only under La Palma it has been quaking more and more frequently for several months. Other regions of the Canary Islands are also affected. For example, there has been an accumulation of earthquakes in the area of El Hierro, on Tenerife (where there was a quake M 1.7 today) and under the sea floor between Tenerife and Gran Canaria. The quakes remind us that the volcanism of the region is only dormant and far from extinct.