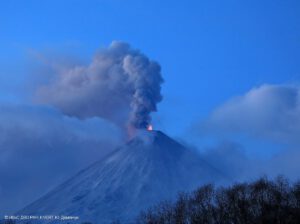 The Klyuchevskoy is located on the Russian peninsula of Kamchatka and continues to erupt effusively and explosively. It produces vulcanian eruptions that produce glowing tephra and volcanic ash. The latter reaches heights of up to 7600 m above sea level. Thus, the eruption clouds rise a good 2800 m above the summit of the volcano. Normally, the volcanic eruptions are generated in the course of paroxysmal activity. In this case, the frequent strombolian eruptions increase within a short period of time, only to subside quite quickly after a plateau phase. The effusive activity also continues. MIROVA recorded a thermal anomaly tonight with a power of 1265 MW. The lava flow has a length of about 2 km. At its front it seems to have widened a bit during the last days. The photo shows a phase of increased activity and was taken by the director of the observatory in Klyuchi on 18. November.