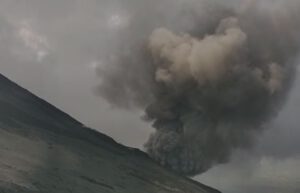 At the Guatemalan volcano Pacaya, volcanic activity increased significantly yesterday afternoon. Social media reports published images showing an ash cloud rising from the flank of the McKenney crater cone. Some comments say that a new crater has formed. However, other phenomena may also cause ash to rise from the flank: One would be the formation of a fracture (fissure) from which a new lava flow flows. On the other hand, blocks could break off from the front of a lava flow and trigger ash flows. CONRED warns of an increase in activity and reports that blocks up to 3 m in size break off from the center of the cone. The block avalanches are moving on the southwest flank of the volcano.