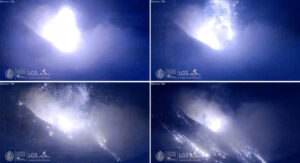 Yesterday evening at 20:04 a major explosive eruption occurred on Stromboli. Glowing tephra covered the crater and its southern flank. However, it is not yet clear whether larger cinders also landed on the Cima and Pizzo. According to first reports the measuring instruments remained undamaged. The explosion was preceded by a 4 minute inflation phase. It raised the inclinometer on the Rina Grande by 1 µrad. The threshold value for the duration of the soil uplift was not reached and so the automatic paroxysm early warning system did not trigger an alarm. Nor was the eruption a paroxysm, but a single explosion. Such explosions occur again and again on Stromboli, even during relatively calm phases, as we are currently experiencing on Stromboli. All parameters of the daily events at the volcano were inconspicuous in the run-up to the explosion. The activity index has been set to “low” for quite some time.