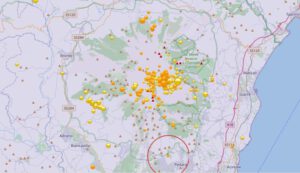 Already yesterday I reported about an earthquake swarm, which today presents itself much stronger than it first appeared. SismoWeb (INGV) today shows 53 earthquakes for November 5. Most of the tremors occurred about 2 km south of Pizzo Deneri on the northern side of Etna. The strongest single quake occurred on M 3.1 with a hypocenter at 3.2 km depth. The majority of the other quakes had magnitudes between 1 and 2. The hypocenters were mostly at depths less than 5 km. This was the strongest earthquake swarm of the last months at Etna. It is very well possible that the quakes were caused by rising magma. An eruption in the upper part of the Valle del Bove, respectively at the base of the Northeast Crater is possible in the medium term. However, it is known that the entire eastern flank of the volcano is moving and the quakes could also be related to tectonic processes.