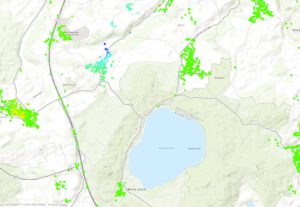 It has often been speculated whether a series of earthquakes at the Laacher Lake volcano, which occurred between 2013 and 2018, might not have been related to the intrusion of magmatic fluids. Now this assumption seems to be confirmed. The confirmation can be found in the form of a new map of the German authority BGR (Bundesanstalt für Geowissenschaften und Rohstoffe), which has been prepared within the framework of the Boden-Bewegungsdienst-Deutschland.

With the help of this map, primarily ground movements which have been caused by mining are to be represented. These are usually ground subsidence which can cause damage to the infrastructure. In fact, the satellites used to create the map did not only detect ground subsidence, but also ground uplift. It is located under the village of Glees, 2 km northwest of Lake Laach. The satellite data show that the ground rose by about 40 mm between 2014 and 2019.

In my opinion, the newly discovered ground uplift would justify a continuous observation of the Laacher See volcano and its surroundings, at least until it can be excluded that the ground deformation is of magmatic origin. Although it is still a small-scale uplift, without regular observation it is not known whether it is increasing. Theoretically an eruption could occur within a few months/years. If the fluid is magma.