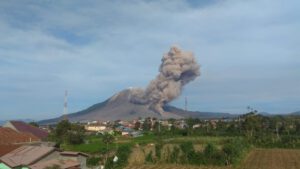 The volcano Sinabung is located on the Indonesian island of Sumatra and increased its activity. Already on October 20, the seismic activity increased rapidly, and in addition to volcanically induced earthquakes, numerous seismic signals were picked up, which were triggered by the discharge of debris avalanches. Yesterday at least one pyroclastic flow was generated, which was photographed but has not yet been included in the MAGMA/VSI updates. The stream had a length of about 1500 m and was active for almost 4 minutes. The events suggest that the lava dome has received a new growth spurt and reached a critical size. It is expected that further pyroclastic flows will be generated in the near future. There is also the danger that a larger part of the dome will collapse. Visual observations of the dome are rare these days because the top of the volcano is mostly hanging in the clouds.