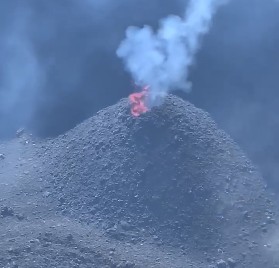 Etna in Sicily is still active from 2 craters. Satellite images reveal 2 thermal anomalies: one originates from the New Southeast Crater, which is known to be strombolian active and has ejected ashes in phases a few days ago. The 2nd anomaly manifests itself in the Northeast Crater. The summiter Elia Finocchiaro climbed it yesterday and brought a nice video of the activity in the crater. Such images of Northeast Crater are rare. You can see 3 active vents from which lava sprays out. From one of the small vents a strombolian eruption was generated. Around the vents cones are already forming.

The tremor did not fluctuate as strongly in the past 2 days. But there were more earthquakes under the central crater area, in Valle del Bove and at the Pernicana fault zone. MIROVA registered a high thermal radiation with an output of 170 MW. Should such a value be measured repeatedly, there could be an intracrater lava flow.