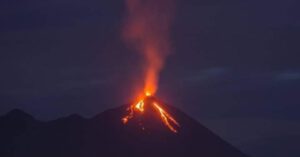 Yesterday the activity of Pacaya in Guatemala increased again. INSIVUMEH reports 3 active lava flows, which were extracted from different vents at the base of the McKenney crater. The longest flow reached a length of 400 m and flowed towards the northeast. The second flow was 300 m long and moved on the north flank, while a third lava flow on the west flank had a length of 200 m. Lava flows there did not occur during the last months. Furthermore, the McKenney crater was strombolian active. During the last night the activity seems to have decreased again a little bit: the only moderate heat radiation displayed by MIROVA indicates this.