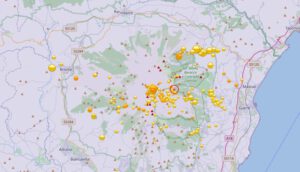 The day before yesterday there were several interesting earthquakes on Etna. The strongest one had a magnitude of 2.9 and manifested 1100 m east of the central crater. The hypocenter was located at a depth of only 700 m. In the same region there were 4 other quakes. In the north of the volcano, a quake M 2.7 occurred, which manifested itself at the Pernicana fault. This quake was also very flat. The INGV located the source of the earthquake at only 600 m depth. There was another quake M 1.2. The quakes at the fault zone are of tectonic origin, but could still be indicators for magma rise, because the magma can press on the fault zones and thus is able to trigger earthquakes.

Of course Etna is not only seismically active, but also eruptive. In the last days eruptions from the saddle vent of the New South East Crater continued. Strombolians and phases with ash ejection occurred. The tremor fluctuates at the border of the red zone. There are no indicators for short-term changes in the eruption process. In the medium term a more intensive eruption phase could brew again.