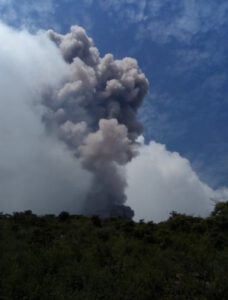 The Nicaraguan volcano Telica yesterday emitted clouds of steam, under which volcanic ash occasionally was mixed. The eruption clouds rose several hundred meters high and caused concern among the volcano’s residents. However, in a media report (100%Noticias), meteorologist Agustin Moreira gives the all-clear. The expert explains that heavy rainfall has triggered phreatic eruptions. The steam explosions fragmented old volcanic rock to ash and blew it out of the crater. New magma had not risen. If this had been the case, seismographs would have registered volcanic earthquakes. According to this, there is no reason for alarm among the population.

However, the situation could change quickly, because the 1036 m high complex volcano Telica is one of the most active volcanoes in Nicaragua. Last summer several gas eruptions were registered. 2 years ago, smaller ash eruptions occurred. The last big eruption had a VEI 3 and happened in 2015.