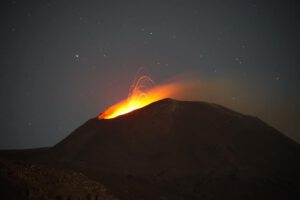 Etna in Sicily is still active and erupts ash clouds and small lava fountains. In our FB group many media were shared about the volcano. Phases alternate in which either intensive ash is transported or small lava fountains are generated. The tremor fluctuates in the yellow area. The earthquake activity has normalized to a certain extent and is back to an average level. MIROVA occasionally registers weak thermal anomalies. However, on a sentinel glider from October 1, a strong hotspot in the New South East Crater is seen glowing. The activity is relatively stable and is expected to continue for a while.