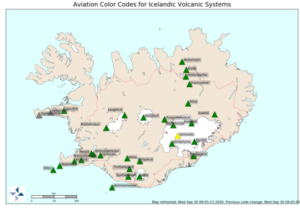 The Icelandic glacier volcano Grimsvötn is preparing for an eruption and IMO has declared the VONA warning level “yellow”. A strong eruption could occur at any time, which could pose a danger to air traffic. In fact, there are still very few aircraft movements, as most of the airplanes remain on the ground due to the pandemic, but caution is the mother of the porcelain box, as is well known.

Various parameters changed in the last months at Grimsvötn. IMO gives the following reasons for the increase of the warning level:

All in all, this is not a surprising development, but a continuation of the trends that were already reported in summer. The exact time frame when the eruption will occur cannot be estimated. It could happen in the next few days, but it could also take several weeks or months.

For many volcano spotter the question is of course how to get to Iceland? In general, trips to Iceland are possible, but people entering the country will have to stay in quarantine for 5-6 days if they get tested twice. The first test is done upon entry, the second test after 5 days. If you do not want to be tested, you have to be in quarantine for 14 days. During the quarantine you must stay in your hotel room. This practically nips any attempt to catch the outbreak in the bud, unless you leave now and wait for the outbreak. If you do not leave until the eruption begins, you will probably be too late at the volcano.