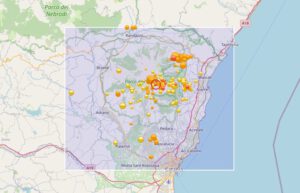 Etna in Sicily remains exciting, because further earthquakes occurred. A quake M 2.0 can be attributed to the swarm quake in the northeast. Yesterday the INGV registered a total of 27 earthquakes on Etna. This was the highest number for months, if not since the eruption of 24.12.2018. Many of the earthquakes also occurred under the Valle del Bove, not far from the Northeast Crater.

In the northwest there was an earthquake today with a magnitude of 3.2, the epicenter was located 1 km from Bronte. The depth of the hypocenter is indicated as 10 km. Even if the quakes are of tectonic origin, they could still be caused by a changed stress environment due to magma rise. I assume that some magma is accumulating under the volcano.