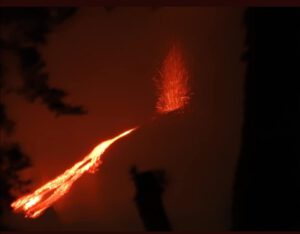 Yesterday evening there was a sudden increase in activity at the Guatemalan volcano Pacaya. Strombolian eruptions came in short intervals and transported glowing tephra up to 70 m high. A new lava flow began to flow again, which quickly covered a distance of 200 m. The activity was accompanied by tremors. A few hours earlier INSIVUMEH reported strombolinaceous eruptions, but not an active lava flow.

During my visit to the volcano in January of this year I also witnessed how quickly the situation at Pacaya can change: suddenly a vent on the south side of the Mc Kenney cone opened and produced a short lava flow. A little later a flow on the north side became active. After a few minutes everything was over again. Such events illustrate the unpredictability of volcanoes.