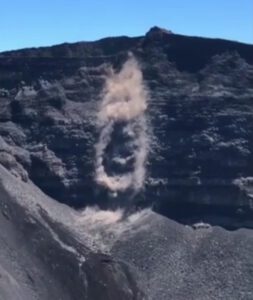 Since September 20, the volcanic earthquake activity under the Piton de la Fournaise has been increasing. Within 2 days 21 weak tremors were recorded. They had maximum amplitudes of 1 and were located at depths between 1.7 and 2.2 km. The epicenter manifested itself under the summit crater Dolomieu. There, on Monday, the release of a debris avalanche was also documented. Whether there is a connection with the earthquakes is unclear. Possibly, inflation also played a role, because a swelling of the summit area was detected at the same time as the quake activity increased. Furthermore, the carbon dioxide concentration of fumaroles increased. The evidence suggests that magma is rising and filling the uppermost magma reservoir. Sooner or later a new eruption will occur. The last eruptions usually took place 3-4 weeks after comparable signs became known.