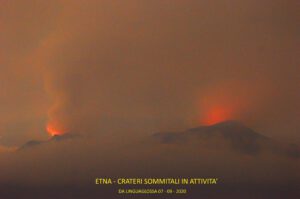 Etna in Sicily continues its weak activity. An Italian volcano observer shared in the social media a picture taken from Linguaglossa in the northeast of the volcano. The picture shows red illuminated steam rising from 2 craters. The craters are the Northeast Crater and the New South East Crater. Both vents show thermal anomalies on satellite images. Probably there are also deep seated strombolian eruptions in the New Southeast Crater. However, these are currently so small that the tephra does not rise above the crater rim. But that is not enough: A sentinel image from Sunday also reveals a thermal anomaly in Bocca Nuova. It is even the most distinctive of the 3 anomalies. So it could be that the central crater could soon play a central role in the eruption process again.

The tremor moves sideways in the yellow area and fluctuates occasionally. The quake activity has decreased in the last 3 days and can be considered moderate.