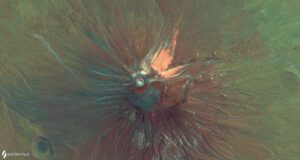 In the past weeks the volcano in Tanzania appeared again and again in the news, so also today. The reason for this is a larger thermal anomaly in the crater. It can be seen on sentinel satellite photos and is generated by the coldest lava in the world. It flows over the crater floor. The anomaly is located on the northwestern rim of the crater and a new hornito may have formed there. This year there was mostly a large hornito active in the center of the crater. There you can still see solidified lava.