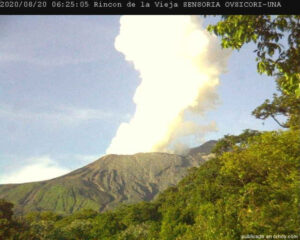 The volcano Rincon de la Viejá (Costa Rica) started on Sunday with a series of eruptions. Within 15 hours 3 phreatic eruptions were generated. The last of these eruptions manifested on Monday morning and was the strongest of the series. It not only produced water vapor but also tephra, which rose up to 500 m above crater level. Already in the previous week there were several eruptions.

The volcano is located in the province of Guanacaste. On its slopes a wonderful dry forest spreads out. I climbed the volcano in 1994 and can well remember the species richness of the forest: howler monkeys, sloths, armadillos and coatis met me at every turn. The coati are extremely voracious and at that time they plundered my food supply, which I had attached to a rope between 2 trees. Nevertheless the coati reached the food and I experienced 3 rather hungry days. Unfortunately I did not see the crater, because the summit was covered in clouds during my 3-day stay at the volcano.