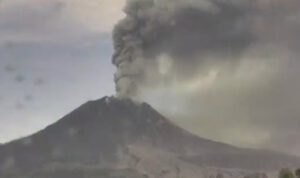 On Sumatra the Sinabung volcano continues to erupt volcanic ash. In light winds the eruption cloud rises up to 5200 m above sea level. Yesterday, local volcanologists recorded 20 seismic signals, 1 of which was due to an eruption. Today they recorded 6 seismic signals in the first quarter of the day, which were related to the ash emissions. Only one quake was of tectonic origin. There was also a tremor phase. Overall, the seismic activity can be described as moderate and only a few magmatic fluids are moving underground. No dome growth has been reported so far, but it could start in the medium term.