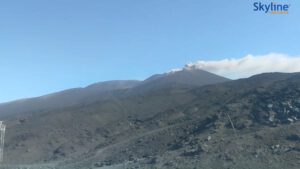 In Sicily, Etna is still active and emits volcanic ash. Strong wind pushes the ash down and blows it into the Valle del Bove, which is located in the east of the volcano. The tremor fluctuates strongly and moves in medial-high spheres. Earthquake activity has not been particularly high in the last 2 days. However, several weak earthquakes occurred below the central crater area on August 14th. It should be noted that the INGV often reports earthquakes with a 1-2 day delay. On the thermal cam you can see that not only the saddle vent of the New South East Crater cone is involved – from which the volcanic ash is emitted – but also the actual main crater of the NSEC. A weak thermal signal is emitted from it and it looks as if hot volcanic scoria or hot fumaroles have been deposited at the crater rim.