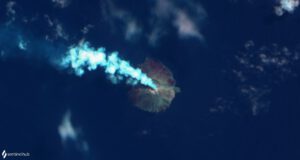 In Papua New Guinea the Kadovar volcano has become more active again. The small island volcano emits volcanic ash, which rises to an altitude of 1500 m. The volcano has been active again and again since January 2018, with major eruptions that changed the face of the island. For example, a lava dome grew on the east coast, which caused concern that it might collapse, causing a tsunami. Also this year, there were some bigger eruptions, but most of them took place under exclusion of the world public. Before the eruptions began, there was a small settlement on Kadovar. This was abandoned in the meantime and the inhabitants were resettled.