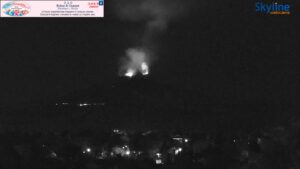 Update 15:00: Apparently there was an episode of increased activity tonight that also involved the Northeast Crater. A livecam image shows a double lava fountain from New South East Crater and Northeast Crater.

Original message: In the last hours the Etna tremor has increased significantly and is now moving in the red zone. At the same time the LGS upgraded the automatically generated pre-warning level to “orange”. Since yesterday noon, more and more signals in the infrasonic range have been detected. They occasionally have a relatively high acoustic pressure of 3-4 bar and come from the direction of the New South East Crater. On the livecam this morning you can only see steam rising. But it is only moderately windy, so I do not assume that the measured values are falsified by the wind. In fact, yesterday hikers walking on the rim of Bocca Nuova observed the sudden onset of an ash eruption from the saddle vent of New South East Crater. Satellite images show ash emissions from the New South East Crater and a thermal anomaly in the Northeast Crater. I wouldn’t be surprised if we would see some activity here in the next weeks. 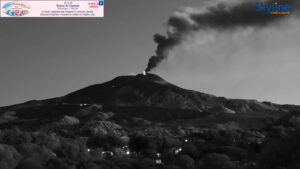 Etna on Sicily continues to eject ash clouds in phases. So it is also active this morning. The volcanic ash rises several hundred meters high and is transported by the moderate wind in southeastern direction. The scene of the event is the saddle vent, which had formed on the ridge between the Old and New Southeast crater cones. Interestingly, the activity of the last months seems to be more and more limited to this crater. This indicates a migration of the conveyor system to the west of this cone group. The actual main crater of the New South East Crater Cone rarely gets involved in the eruption process. A VONA message was not generated. The VAAC Toulouse last reported an ash cloud on August 25. Although no heat radiation was recorded, images of nighttime eruptions show that red glowing tephra was erupted.

The earthquake activity is moderate. Most of the earthquakes have magnitudes between 1 and 2 and are scattered over the volcano, sometimes not concentrated under the Valle del Bove. The tremor amplitude varies greatly and is mostly in the yellow range. It looks like the eruptive behavior of the volcano is relatively stable. Although Etna is always good for a surprise, I don’t see any sign of major changes in the short term.

In the crater area of Irazu Volcano, a large part of the slope has collapsed and slipped down. According to OVSICORI expert Cyril Muller, there were at least 100 small landslides on August 25th. A crack in the slope had widened by 40 centimeters. Yesterday morning the big landslide occurred, in which several million cubic meters of material slid down. Due to the bad weather conditions, there are only pictures of the edge of the landslide so far. It manifested itself at the border of an antenna park. 2 containers with transmission equipment were torn into the depths. The rest of the antenna equipment is now directly at the edge of the slide and could still slide down. The antenna park is located southwest of the crater, on a ridge that ends directly at the crater rim.

The event was not unexpected. Already in May 2019 a major landslide occurred. At that time, the main crater to the north was affected and a 10 m high tidal wave was triggered in its crater lake. In the meantime the crater lake had practically disappeared. Scientists observed the increasing crack formation in the crater walls for a long time.

The Irazu is located a few kilometers east of the capital San José and is with a height of 3.432 m the highest volcano in Costa Rica. The last eruption was in 1994 and due to the current development the alarm status is set to “red”. Sudden changes in the load of the volcano could lead to pressure changes inside the volcano and trigger eruptions. In addition, deeply descending crevasses could open. However, there is no evidence that there is an active magma body under the volcano. Therefore an immediate eruption is unlikely. 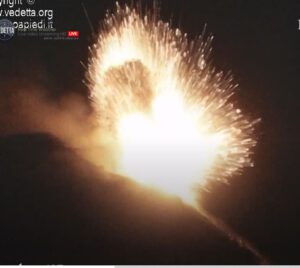 Stromboli increased its activity again. Yesterday the live cam observers of our FB group managed to capture some nice screenshots. Currently the activity is considered moderate by the LGS, and there may be phases of increased activity. The acoustic explosion pressure yesterday reached 2.02 bar and 65 eruptions were detected. At the moment comparatively much glowing tephra is landing on Sciara del Fuoco. This is not only due to the explosion strength, but also to the crater morphology.

Stromboli is one of the word’s most active volcano. The lighthouse of the meditarrane is in almoust continously eruption for 2000 years. 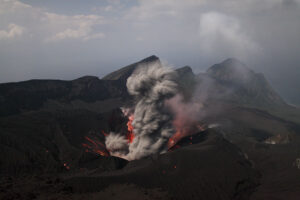 The Japanese island volcano Suwanose-jima is in top form. In the last 24 hours, the VAAC Tokyo issued 10 reports of ash clouds emanating from this volcano. The ash reached an altitude of 2400 m above sea level and drifted in a north-westerly direction. The ash is likely to be erupted during strombolian activity, although volcanic eruptions may also occur.

Local volcano observers today report 2 stronger eruptions in which volcanic ash rose almost 2000 m above crater level. The first eruption occurred at 14:49. The second eruption was recorded at 04:52. Here, the JMA report states that during this eruption a larger volcanic bomb was produced, which landed about 600 m away from Mitake Crater. It warns that bombs could be falling within a 1 km radius of the Mitake. Ash fall was observed in a village 4 km away from the crater. At night, red illuminated clouds were seen over the crater. The photo is from the archive of Thorsten Böckel/Martin Rietze.

Since August 14th some volcano-tectonic earthquakes were registered. Already in December 2019 slight inflation set in. The alarm status is set to “2”.